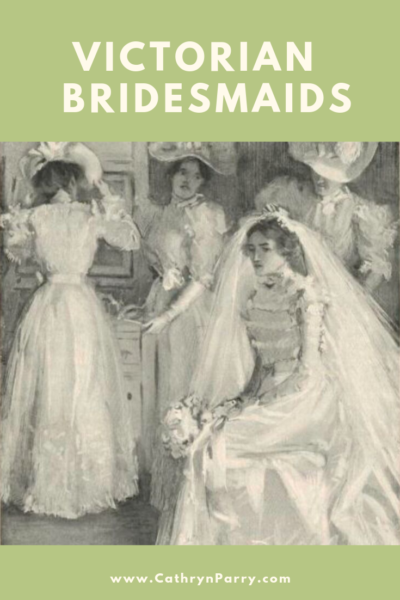 Selecting Your Bridesmaids; circa 1894

“Modes and Fabrics” gives this advice on the subject:

In selecting bridesmaids it is not beauty that counts as much as style and carriage. Particularly you want girls who walk well. The slow march down the aisle is an excellent test of gait. Girls radiantly pretty lose all their good looks by their hobbling walk.

Those who walk with stately slowness, and seem to glide, make the best bridesmaids. The bride herself is helped by her long train, her drooping head and the leaning on her father’s arm before, and her husband’s after the ceremony; but the bridesmaid wears a short gown, has to look on a level, and walk at the side of another girl, and has to depend on her own grace alone to carry her through.

At no time is a girl so severely criticized as when she takes part in a wedding; therefore bride-elect, if you wish to have a really smart affair, choose girls who walk well, whose heads are well set on their shoulders, and who have their hair arranged becomingly. Even though they lack extraordinary beauty of the face, they will make an excellent appearance as bridesmaids.

Fabric and Colors for Bridesmaids’ Gowns

Grosgrains and various corded silks are used for bridesmaids’ gowns. These crisp silks, says Harper’s Bazaar, will form the wide skirt and stand out sleeves, while some softer fabric will be draped as a high round waist.

Colored satins will also be chosen for these young maidens’ dresses, but instead of the stately stand alone fabric worn by the bride they will wear the softer liberty satin in delicate shades of rose pink or yellow. Gray and geranium red satins are worn by English bridesmaids, but one is too cold looking and the other too showy.

A good plan is to have the gowns of white liberty satin, completing them with a colored collar and belt of mirror velvet. In this way variety may be given and something becoming found for each maiden, as in a group of six bridesmaids three brunettes will wear cerise or geranium velvet collars and three blonds either bluet or green collars.

Still another set of four maidens is to have mauve and golden yellow added in chiffon collars and in blouse fronts on white taffeta gowns the are dotted with these colors. White gloves and white slippers will be worn with white dresses. With colored gowns the slippers and stockings are of the same color.

Here is an example of a “church” wedding held in Cambridge during this time period. Note the description of the bridesmaid and their gowns. (From the Cambridge Tribune, Cambridge, Massachusetts, Saturday September 30, 1899 p. 3). 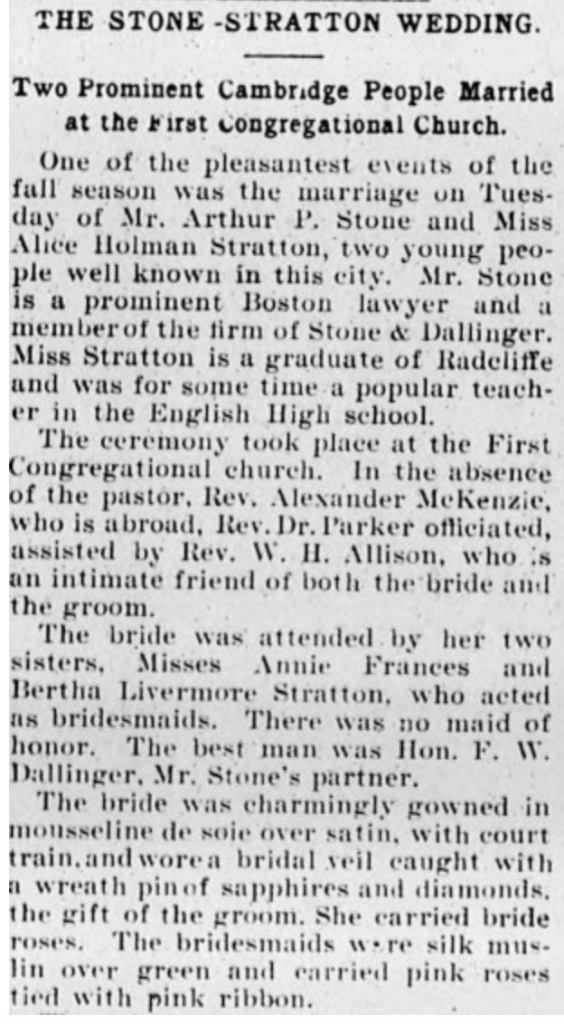 In the Cambridge newspapers of the 1890s, most local marriages are held at home and are described in the newspaper in summary form. Typically, one bridesmaid is present, and she is a relative or close friend of the bride, though she is not mentioned in the marriage notice.

Here are two examples from my family tree. These are the McCready siblings:

McCREDY-LITTLE— in Somerville. Nov. 23, by Rev. A. L. Snell. Charles Albert McCredy and Rosella May Little, both of Cambridge.

(The siblings used different spellings of their last name. The nine siblings in this family used spellings MacCready, McCready and McCredy.)

The marriage of Benj. W. MERRITT, Kars (KIngs Co.) to Sarah J. McCREADY fifth d/o Andrew McCREADY took place at the residence of the bride’s father, 8 o’clock Monday eve. The bride was attended by her eldest sister, Miss Evangelina McCREADY, and the groom had as best man, Gilford GREEN, cousin of the bride. The ceremony was performed by Rev. O.N. Mott, assisted by Rev. G. W. Corey and J.D. Wetmore, Baptists.

One last example of a newspaper article, which I enjoyed for the Scottish connection. This is the wedding of a prominent man, and the reporter describes the occasion in great detail:

A Pretty May Wedding.

Superintendent Cameron of the Harvard Botanical Gardens Becomes a Benedict*

The plain, old fashioned house at the Harvard Botanical gardens on Raymond street, was the scene of a pretty but quiet and unostentatious home wedding, last Wednesday evening.

In the front parlor the ceremony was performed by Rev Peter Mac Queen, of Somerville, which made Mr Robert Cameron and Miss Ann Stewart man and wife.

The bride was becomingly attired in a pinkish gray silk and carried a bouquet of bride roses.

The bridesmaid was Miss Mary Stewart, who wore a pretty blue silk dress cut a la mode. Mr John Beaton was best man. The ushers were Mr Duncan Finlayson and Mr William Kennedy. A reception and bountiful supper, furnished by M. R. Jones, followed the ceremony. After the supper, when the bride and groom came out of the dining room, they were greeted by a shower of rice.

Dancing of old Scottish reels and other dances followed the supper, music for dancing being furnished by Mr William Lim, violin, and Mr William Kennedy on the bag pipe.

The house was very prettily decorated with Japanese lanterns and flowers.

*A “Benedict” is a newly married man, one who has long been a bachelor.