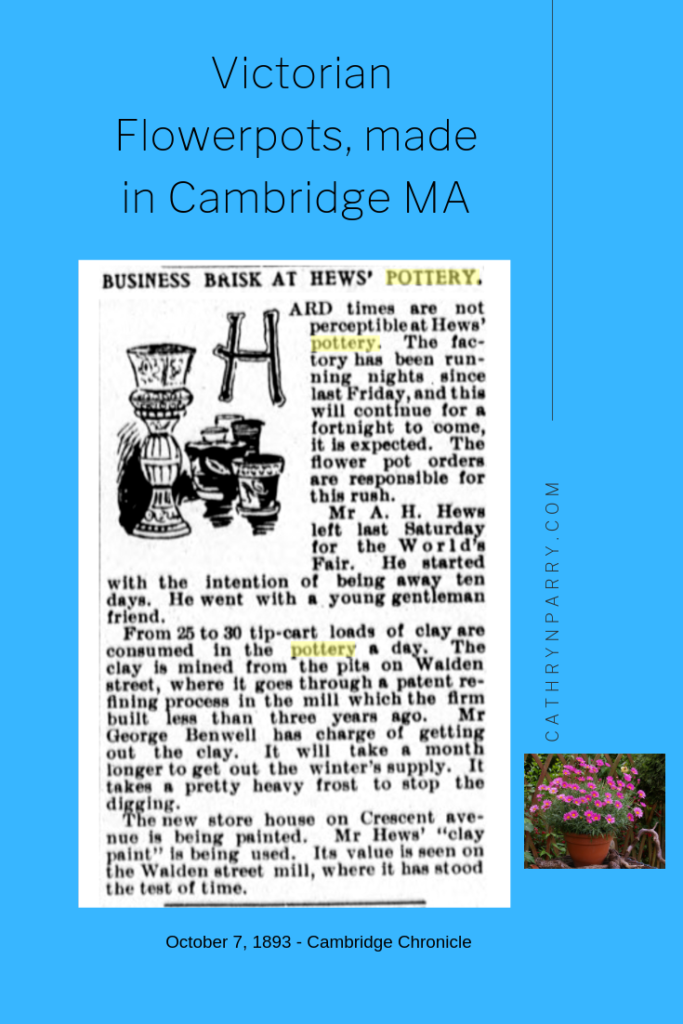 People in the Victorian era loved to display plants inside their homes. During the winter, they forced bulbs—daffodils, narcissus, hyacinths—in beautiful glass “bulb-forcing” containers. Year round, they displayed garden pots in their parlors.

Red clay flowerpots, similar to what we still see today in garden centers, were popular. The biggest red clay flowerpot manufacturer in the U.S. at the turn of the 19th century was located in North Cambridge, Massachusetts, on Walden Street and what was then known as Crescent Avenue, on the Somerville line:

“…[A.H. Hews & Co.] is the largest producer of florists’ ware and fancy red earthenware in the country, having an annual output of flower-pots alone of about 16 million.”

When I think of Cambridge, Massachusetts today, I think of Harvard University, cutting-edge biotechnology research firms and gentrified, leaf-lined neighborhoods. I certainly don’t think of earthenware clay pits! But when the Puritans settled Boston, they needed clay to build chimneys and bricks, and one of the biggest supplies was located in North Cambridge.

In 1765, Abram Hews built his original pottery business in Weston, Massachusetts by hauling clay from North Cambridge. The demand for bricks waned, so by the late 1800s his family company focused on their more lucrative market niche of flowerpots. The history of the company is quite interesting:

“The pottery of A.H. Hews & Co, of North Cambridge is an establishment of more than usual interest. Not only because among its products are some of the most beautiful specimens of American Art Pottery, but that it is one of the very few of the kind in America, that has existed and been in the possession of one family for nearly a century and a quarter. In 1765, 123 years ago, Abram Hews founded the enterprise, which has descended through his children and grandchildren to A.H. Hews, his great-grandson, the present proprietor.

“It was first started in Weston, but twelve miles from Cambridge, and moved into its present commodious quarters in 1871. The present factory is quite extensive, and gives employment to about 60 hands, principally men, though some girls are in the decorating room.

“The power is furnished by a steam engine of fifty horse power, and a new engine and boilers were put in last year. The clay is procured near by, and a winter’s supply is stored in the cellar, in which it is kept tempered by the admixture of the proper quantity of water, added from time to time.

“Messrs Hews & Co are evidently doing a thriving business. They work up to ten tons of clay per diem and ship from four to five car-loads [note: train cars] per week, and find their customers in every State in the Union, from Maine to California.” 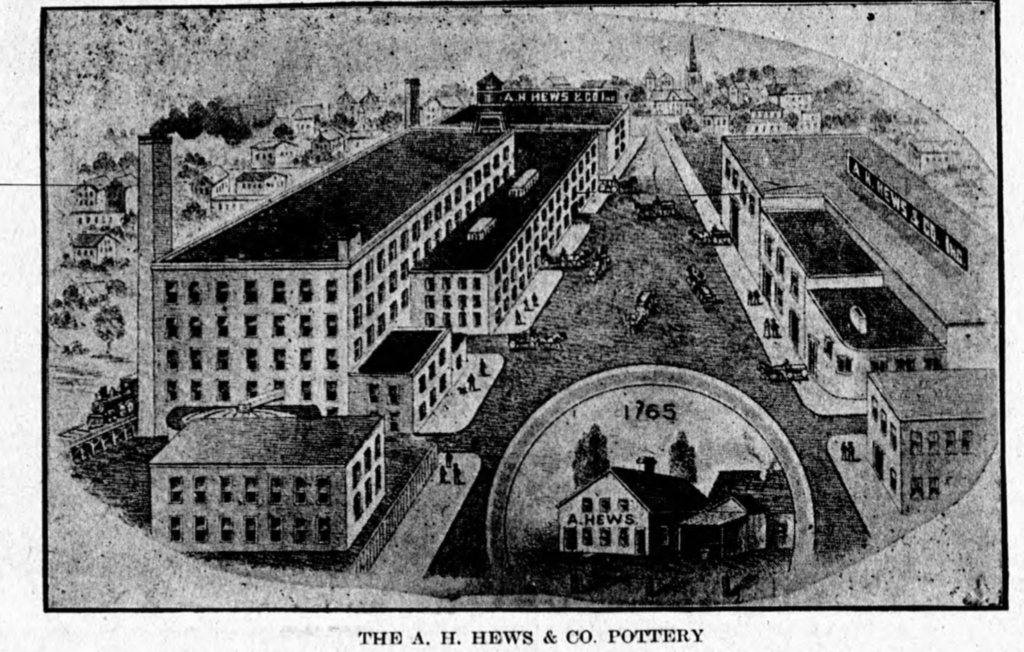 Hews Pottery in Cambridge was but one of the many industries employing immigrants in Victorian-Era Cambridge, and it’s where my English and Canadian immigrant family worked when they first came to America in the 1890s.

George Henry Parry, from Liverpool, lived near his employer.  At his death in 1908, the local newspaper read:

George H. Parry, 45 years of age, residing at 4 Miller street, Somerville, died suddenly of apoplexy last Sunday evening. He was formerly a resident of 53 Hubbard avenue, North Cambridge, and for over 14 years, had been employed as driver for the Hews Pottery company.

As a driver in the 1890s, George would have commanded a wagon with a horse(s), but his stepson, also a driver with Hews Pottery, used newer technology—trucks. In 1924, an accident while repairing his stalled delivery vehicle loaded with pots led to his untimely death. The headline on the front page of the Milford, Massachusetts newspaper read, “Run Over By His Own Truck, Dies Afterward.” He lived long enough for his wife and mother to rush out to see him in the hospital before he passed away. 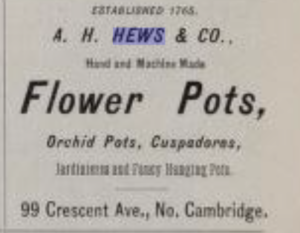 A great resource for family historians interested in Cambridge, Massachusetts is the Cambridge Public Library website and its link to the digitized local newspapers from the 19th and 20th centuries.

Cathryn’s Note: Sharing the North Cambridge clay pits in the late 1800s was a company called Parry Brickmaking. Three sons ran the firm together, and these men were influential, serving as leaders in local politics and civic organizations. This Parry family is not related to my Cambridge Parrys, who were of English/Welsh descent. The brick-making Parrys are French-Canadian in origin, having anglicized the spelling of their last name from Pare. 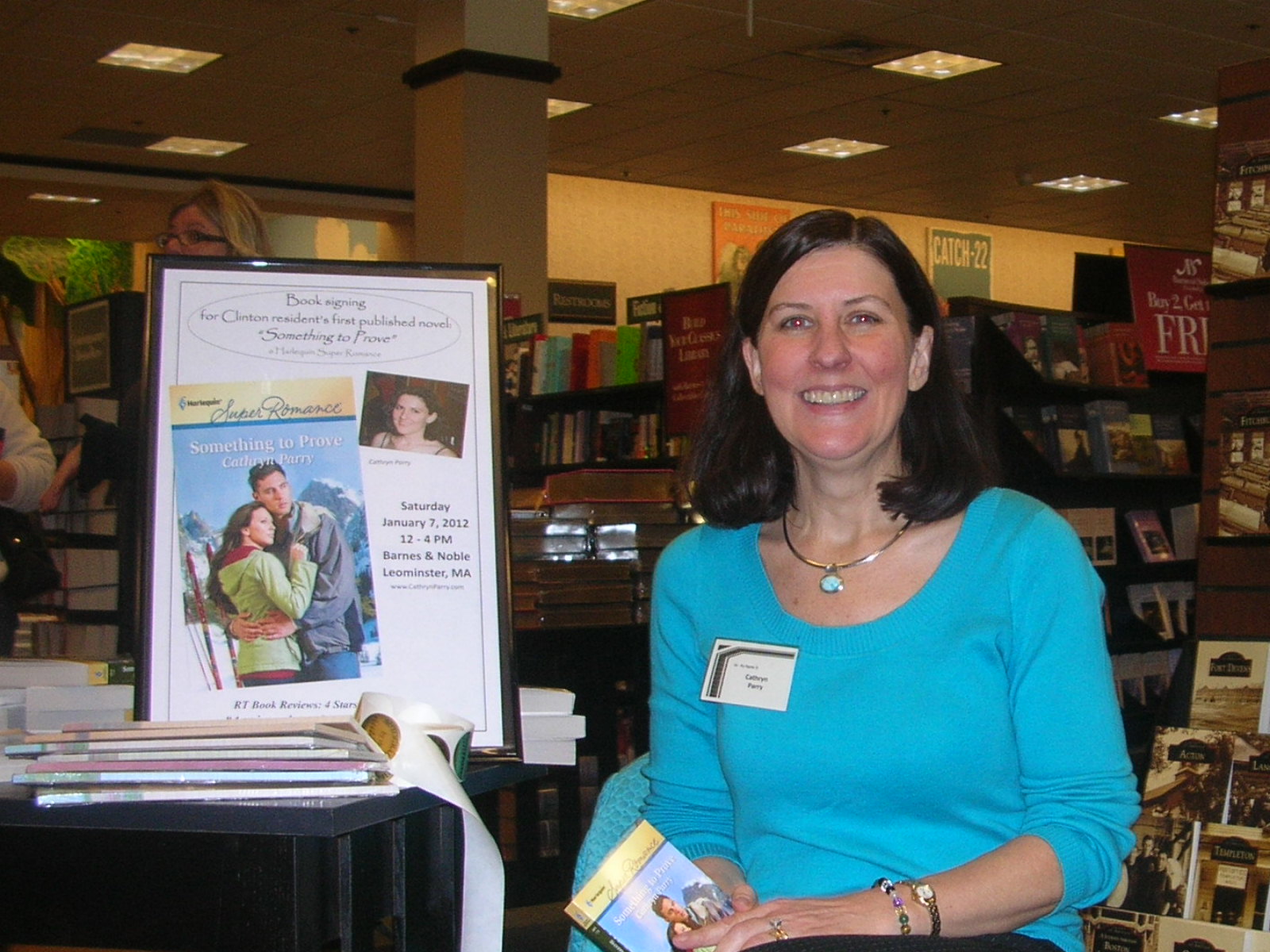